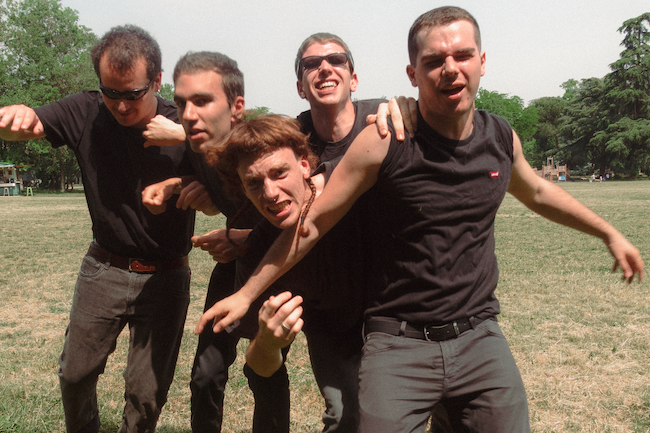 Leatherette are, by their own description, “five shy guys who sometimes get off the stage and punch people,” a quintet whose car-crash of jagged noise, twisted love and dark, anguished melody has delivered a remarkable – and eminently combustible – debut album. Fiesta offers release for any who might need it. You can file them near fiery post-punk kindreds like Shame and Squid, or unhinged 90s noisers like Unwound or Hoover, or squalling No Wavers like James Chance, but the truth is there are few bands like Leatherette that walk this Earth.
Based in Bologna but hailing from other cities all over Italy, they formed first as a trio – singer/guitarist Michele, bassist Marco and drummer Francesco – before expanding their membership in 2019 and welcoming aboard guitarist Andrea and Jacopo, whose saxophone takes their molten caterwauling in unexpected and wonderful new directions (check ‘Dead, Well…’, where his poetic horn fuses with screaming Sonic Youth guitar and Michele’s pushed-way-past-the-comfort-zone howl to create something unsettlingly wonderful).
“We were more soulful, more jazzy back then,” says Michele. “We wanted to be more rough, to be less shit. And we wanted a saxophonist to be less jazzy.”
That saxophone is the element that catches your ear first, beaten and beautiful on ‘Cut’, but soon it becomes clear that Leatherette are more than the sum of their electrifying parts, that their chaotic jigsaw of unlikely pieces adds up to something unique and vital.
The same-old, same-old has never been on the agenda. Their motivation is to express themselves. All hailing from different cities, they met online and bonded in Bologna, a big university city that’s full of bands, and also full of people who want to see bands. But the competition is heavy, and also Bologna is still small. And Leatherette’s ambitions are big, too big to be contained within a small city.
They bonded over music, although each member brings with them their own fingerprint-unique tangle of influences, like the early work of Idles, midwestern emo groups like American Football, lots of rap and electronic music, garage-rock, King Gizzard & The Lizard Wizard, art-rock like King Crimson and Berlin-era Bowie, John Coltrane and James Chance, Frank Ocean.
Fiesta is their first album, though not their first release. They recorded and released an EP, Mixed Waste, during lockdown, the process of which the group describe as “like communal therapy”. The songs on Fiesta predate those on Mixed Waste; the album was planned before COVID, and while they’ve written further songs since then, the group wanted to release this first batch of songs as a piece. Their vintage hasn’t deadened their attack; indeed, the time spent getting inside the songs live, rewriting and rearranging them before the long-delayed recording session, has brought more complexity, more passion. “Rearranging and finally recording these songs was amazing,” they say. “We had time to put them together in a more coherent way. And recording them properly was amazing for us – like, ‘Oh my god! So we can actually sound good?’”
Lean and limber from regular gigging, Leatherette played their debut album “almost like a live album”, they say. The result is a sucker-punch of an LP: the sound of bruises, the sound of uncertainty, of anxiety, punctuated and punctured by explosions of cathartic violence, a voice pushed beyond any comfort zone and into the blood-red blossom of impassioned and empathetic saxophone.
“People say, ‘I’ve got demons inside me, I make music to exorcise them’,” the group add. “That seems like a stupid, teenager-ish thing to say. But our music is the most sincere thing we could do. In music we don’t have to hide ourselves. Something might be cringe for me to say out loud, but through music we feel allowed to express it. We feel like we can make it meaningful.”
The album title is “a reference to the bull-fights in Pamplona. It’s a strange ritual. And we’re against bull-fights, but they’re fascinating in an iconographic way. And also metaphorically, violence flows on both sides, but in a feastful way. It’s similar to a concert, really – you’re expressing violent things, in a physical way. And people react to that, which is wonderful, which is fantastic.”